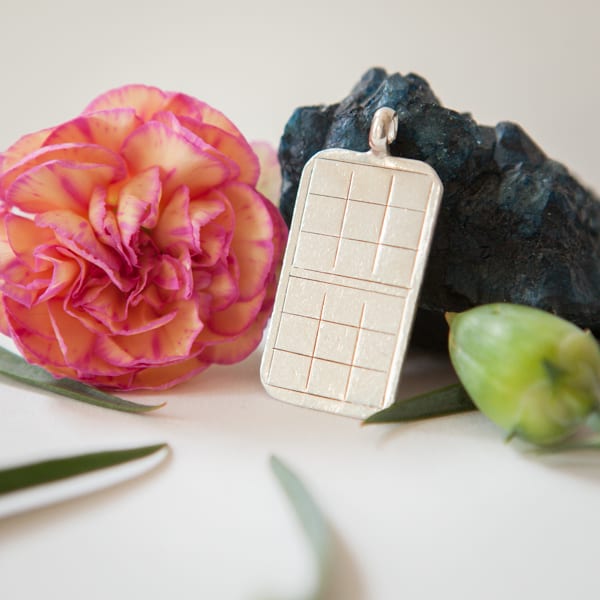 The kavach is used to improve your mental and emotional outlook, physical health, marriage, relationships, career, income, prosperity, spiritual progress — and all areas of life.

The kavach pendant is said to be more powerful than wearing four to six gemstones, including the ruby, pearl, red coral, emerald, diamond, and blue or yellow sapphire. It is, however, far more economical than the thousands of dollars required to achieve the same remedial power with gemstones.

HOW TO USE THE PENDANT/KAVACH

The silver medallion (kavach) is less than 2″ in size — and is worn as a pendant on a gold or silver chain, or on a silk thread, whichever you prefer.
The mystical pendant is worn for the first time at an auspicious moment, which is assigned to you according to your place of residence. (Instructions are included).

The pendant is then worn continuously for the maximum cumulative effect. (If you have to take off the pendant for any reason, such as for x-rays or security checks at airports, etc., then put it back on immediately thereafter.) There is one pendant made for each rising sign of the Zodiac. All are handmade — no two are exactly alike. Each one is inscribed at an auspicious time for the maximum benefit.

NOTE: A Special Power Kavach is also available for $370 (including shipping). These are engraved and empowered at the most auspicious times during the year, so they are considered to have more power than the regular kavach. These are recommended for those with severe weaknesses and afflictions in his or her horoscope.)

“The pendant is the best thing which one can have in one’s lifetime. One who is destined for it understands this, and decides to take benefit of the pendant.”
~ V.K. Choudhry, Chairman, Systems’ Institute of Hindu Astrology

“I have personally worn a kavach pendant since 1997 with great success. The experience is quite tangible. I feel like it moves me in a positive direction and has helped me manage all the various situations that come up in life. My wife and three children also have the benefit of wearing kavaches as well.”
~ David Hawthorne, President, Astroview, Inc.

“I feel more at peace wearing my Kavach. It seems like every time I take it off for whatever reason I notice things are just not going my way. I have close calls with accidents and generally feel less nature’s support. I immediately feel the difference as soon as I put it back on.
–Sara Hawthorne, Owner, PlanetarySara

THE KAVACH AND VAASTU

In the 2001 edition of THE VAASTU WORKBOOK by Talavane Krishna, M.D., published by Destiny Books, there is a chapter called “The Relationship of Vaastu to Yantra, Mantra, and Tantra”.

In this chapter, the author includes the numerical yantras for each of the nine planets, which are identical with the numbers inscribed on the pendant we wear, known as the kavach. He explains, “Yantra is a tool or a symbol conceived as a form pattern used to represent a diety or a cosmic principle. Mantra is the sound body of the principle. Upon constant repetition of a thought in the form of a mantra, the yantra is energized with the intended power of the mantra. When this energized yantra is used to accomplish a particular outcome, the process becomes known as tantra. In its highest essence, tantra is the practice of the precept that the devotee with name and form is one in identity with the deity that is nameless and formless.

Yantra is used in different forms in all cultures and societies (holy cross, crescent moon, dieties, planets, country flags, and corporate logos, etc.).
Vedic seers used geometric patterns, numbers, Sanskrit characters, and lotus flower petals in designing yantras. Vaastu directs the design and construction of a structure according to the correct arrangement and placement of the five elemental principles in such a way that the building itself acts as a yantra. The yantras of the nine planets are the main basis for vasstu design.

THE KAVACH AND YOGANANDA

In the Autobiography of a Yogi, by Paramahansa Yogananda, in Chapter 16, “Outwitting the Stars”, we find the following:

“Then, dear Master, why do you want me to wear an astrological bangle?”

“It is only when a traveler has reached his goal that he is justified in discarding his maps. During the journey, he takes advantage of any convenient shortcut. By a number of means — by prayer, by will power, by yoga meditation, by consultation with saints, by use of astrological bangles — the adverse effects of past wrongs can be minimized or nullified.”

“The sages discovered that pure metals emit an astral light which is powerfully counteractive to negative pulls of the planets.”